The Swift spacecraft must be able to operate autonomously in order to react rapidly to new targets. When the spacecraft settles on a new target the XRT begins operation in Imaging Mode to determine the location (to better than 2.5arcsec within 5sec) of the GRB. In the other modes, Photodiode, Window Timing and Photon Counting the XRT will measure the lightcurve and spectrum while the burst afterglow flux is decreasing by many orders of magnitude. The XRT is designed to switch between different readout modes according to the instantaneous count rate in a completely autonomous operation.

While the spacecraft is slewing to a new target the bias row and the bias map are calculated from a WT and 5 PC frames. A raw frame for diagnostic porpuses is taken if the raw image flag is set. During the remainer of the slew the spacecraft is in LrPD mode until it settles on the target, and a 0.1s Image mode frame is taken and a centroid determined. If the fulx is too low for an accuate centroid a 2.5s frame is processed. After completing Imaging mode the instrument switches between PuPd, LrPd, WT and PC mode depending on the source count rate. A flowchart of the automated operations is shown below.

The Swift XRT has the following readout/processing modes: 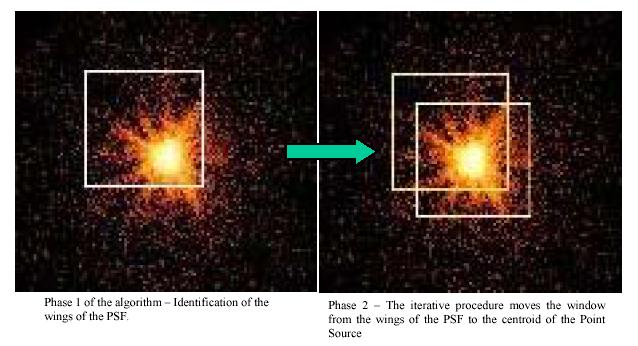 Although the Image Mode centroiding algorithm is designed to ignore cosmic rays, if the source is faint the algorithm can sometimes centroid on a cosmic ray position rather than a real celestial source. Cosmic rays dump a lot of charge in the CCD in a very compact region. The TDRSS position message flags cases that have large signals and therefore may be contaminated by cosmic rays, but this signature can also be produced by very bright afterglows. The XRT Postage Stamp image can be examined to determine whether such a case is likely to be a celestial source or a cosmic ray. For details, see the XRT Postage Stamp Image Photo Gallery .

There are two main pieces of flight software:

The Level 2/3 software is called the XRT Data Analysis Software (XRTDAS), a set of FTOOLS specifically developed for the XRT instrument by the ASI Science Data Center (ASDC, Frascati, Italy) in collaboration with HEASARC at NASA/GSFC and will support both pipeline and interactive data analysis. XRTDAS generates high level scientific data products, including cleaned and calibrated event files, images, spectra and lightcurves. XRTDAS files are in FITS format and fully comply with the NASA/GSFC Office of Guest Investigator Programs FITS standard conventions. XRTDAS is written in C, Fortran and Perl languages, it uses the HEASARC calibration database (CALDB) mechanism and runs on Unix platforms. XRTDAS is part of the HEAsoft Swift package for the analysis of all Swift data.

XRTDAS is available from the HEASARC at NASA/GSFC.

With the exception of occasional manual calibration observations, the operation of the XRT is autonomous and driven by the on-board observation timeline and to newly discovered GRBs. The Swift Mission Operation Center (MOC) will load pre-planned target (PPT) timelines onto the observatory on a daily base. New GRBs trigger Automated Targets (AT) which are generated on-board by the BAT instrument. The Figure of Merit process controls the observing timeline and arbitrates between the PPTs and the ATs according to their assigned observing priorities.

The Swift observatory is in low Earth orbit and the XRT and UVOT cannot be pointed closer than 30 degrees to the Earth's limb. Because of this there is no "Continuous Viewing Zone" and the observations of any given target will be broken into segments of 20-30 minutes, called "snapshots".

The figure below provides an illustration of a typical "day in the life" of the XRT. It shows schematically how a newly discovered GRB (an AT) interrupts a previously scheduled series of observations (PPTs).