The XRT Focal Plane Camera is based on the XMM/EPIC cryostat design. It provides a vacuum enclosure for xthe CCD and optical blocking filter during ground operations and launch, shielding for the CCD against optical light and cosmic rays, and cooling for the detector. The cryostat will be kept evacuated before launch. It has a single-shot door opening mechanism, utilizing a Starsys High Output Paraffin (HOP) mechanism to release compressed 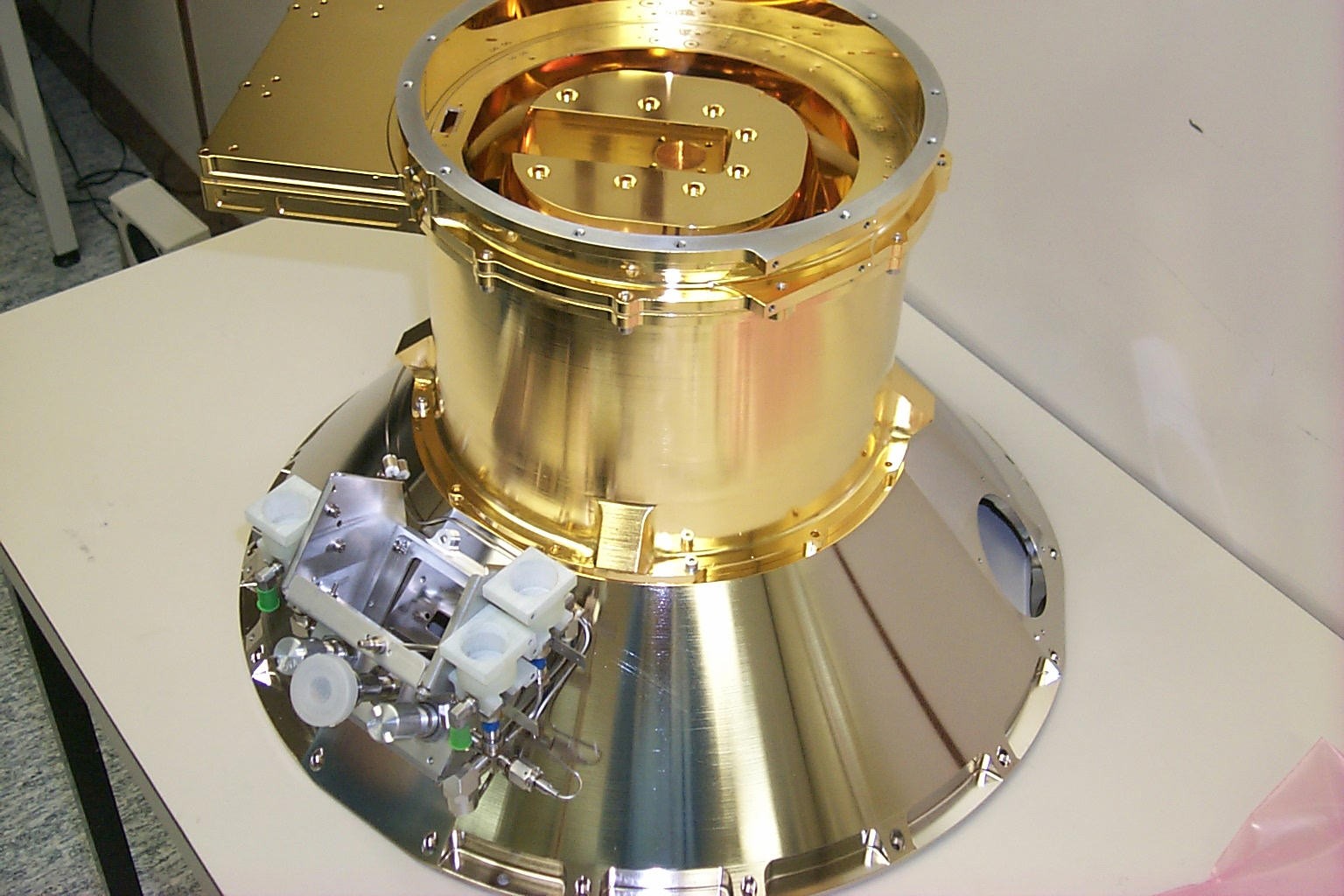 gas, which was developed for the JET-X project and is also used on the XMM/EPIC cryostats.

This figure shows the design of the XRT Focal Plane Camera. The CCD is cooled by a Peltier cooler connected to a cold finger and radiator at the back of the telescope. The door mechanism seals pneumatically and opens using a spring-loaded mechanism. A shield surrounds the CCD to protect it from proton damage.

As the CCD is sensitive to light, a thin filter is required in front of the CCD to block optical light. The filter design and type will be taken from the EPIC camera design, and will consist of a single fixed filter of 1700 A of polyimide coated on one side with 825 A of Aluminum. Similar filters were flown on ASCA and are being flown on Chandra/ACIS and XMM/EPIC.

The FPCA is also equipped with a sun shutter, a safety mechanism designed to protect the CCD and filters from solar illumination in case of an attitude control failure. The sun shutter is powered by a Ga-As array mounted on the top of the mirror baffle that powers the sun shutter electronics if the spacecraft accidentally slews to within 30 degrees of the Sun, even if the XRT is turned off. If the XRT is pointed closer than 10 degrees to the Sun, the shutter is automatically closed.

The FPCA also hous a set of calibration sources (at the corners of the detector in this image from Panter calibration data) for in-flight calibration, which permit to measure resolution, gain and charge transfer efficiency throughout the mission. A thin Luxel filter, similar to those used on the Chandra/ACIS and XMM/EPIC intruments, is installed in front of the CCD to block optical light.

The EEV CCD22, designed for the EPIC MOS instruments on XMM, is a three phase frame-transfer device which utilizes high resistivity silicon and an open-electrode structure to achieve a useful bandpass of 0.2 to 10 keV (Holland et al. 1996, Proc. SPIE, vol. 2808, p. 414). It has an imaging area of ~2.4 x 2.4 cm. The image section of each CCD is a 600 x 602 array of 40mm x 40mm pixels, each pixel corresponding to 2.36 arcseconds in the Swift focal plane. The storage region is a 600 x 602 pixel array, of 39 x 12 mm pitch. The readout register is split into two sections, and may be read out using either output node, or may be split and read out using both nodes simultaneously. The CCD may also be operated in timing mode or window mode, which allow faster readout of fewer pixels so that bright sources may be observed without saturation.


The energy resolution of the CCDs is shown in the figure above, in which the dotted line is the ideal (Fano-limited) resolution, the solid line is the predicted resolution for an EPIC MOS CCD and the points are measurements from a typical flight device. Below approximately 500 eV the effects of charge trapping and loss to surface states become significant.

The QE of an X-ray CCD is determined by the gate structure at low energies and by the depletion depth at high energies. A special "open-gate" electrode structure gives the CCD-22 excellent low energy quantum efficiency, while high resistivity silicon provides a depletion depth 30 to 35mm to give good QE at high energies. Quantum efficiency measurements of these detectors have been made at Leicester University and at the Orsay Synchrotron. These measurements have been incorporated into Monte-Carlo and analytical models developed for XMM/EPIC to simulate the quantum efficiency and spectral response of the CCDs. These models are readily transferable to the Swift XRT.

CCDs are susceptible to both ionizing and non-ionizing radiation damage, but the primary area of concern for an X-ray photon-counting CCD spectrometer in low Earth orbit is displacement damage caused by proton irradiation, which results in the creation of electron traps in the silicon lattice. These traps degrade the charge transfer efficiency of the device over time and directly degrade its energy resolution. We note that the ability of the CCD to measure accurate source positions and lightcurves is unaffected by this proton damage until doses far in excess of the total Swift mission dose are reached. Only spectroscopy is affected.

A radiation study for the XRT in the baseline Swift orbit has been performed indicating that the equivalent 10MeV proton flux seen by the XRT detectros is 3.4x10^8 protons/cm^2/yr. The expected total dose for the XRT in a nominal two-year mission is comparable to the total mission fluence of 5x10^8 protons/cm^2 expected for XMM. Considerable analysis and laboratory test data from the EPIC program are therefore directly applicable to the XRT. Laboratory measurements using CCD-22s irradiated to 2.5x10^8 10MeV protons/cm^2 have been used to verify that the XRT will achieve its end-of-life requirement of 300eV resolution for 6keV X-rays.