TOO requests TOO API

All systems are operating normally.
September 23, 2022: swifttools 3.0.8 Python module has been released. See Changelog for what's been updated!

The Mission Operations Center (MOC) for Swift is located approximately 2.5 miles from the University Park campus of Penn State. The MOC is lead by Mission Director John Nousek, and consists of two teams: the Science Operations Team (SOT) and Flight Operations Teams (FOT).

FOT, lead by Mark Hilliard, perform the crucial engineering tasks necessary to operate the Swift spacecraft, including commanding, downlinking data, and ensuring the health and safety of the spacecraft.

SOT, lead by Jamie Kennea, are in charge of generating observing plans for Swift, handing Target of Opportunity (TOO) requests from the astronomical community, and responding to realtime events such as Gamma-Ray Burst triggers. You're probably here for a TOO request, we got >1700 of them in 2020!

In addition, two of the three instrument teams are lead by Penn State: the Ultraviolet/Optical Telescope (UVOT) lead by Michael Siegel, and the X-ray Telescope (XRT) lead by Jamie Kennea. 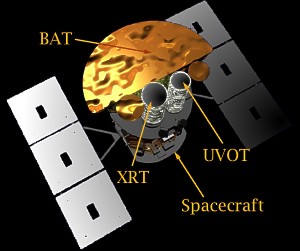 The Neil Gehrels Swift Observatory carries three instruments to enable the most detailed observations of gamma ray bursts to date. Two of these instruments, the X-ray Telescope (XRT) and the UV/Optical Telescope (UVOT) were built by Penn State and collaborators at Leicester University and the Mullard Space Science Laboratory (both in England) and at the Osservatorio Astronomico di Brera (in Italy). In addition, Penn State is responsible leads Mission Operations Center, which operates the satellite.

The three coaligned instruments are known as the BAT, the XRT, and the UVOT. The XRT and UVOT are X-ray and a UV/optical focusing telescopes respectively which produce sub-arcsecond positions and multiwavelength lightcurves for gamma ray Burst (GRB) afterglows. Broad band afterglow spectroscopy produces redshifts for the majority of GRBs. BAT is a wide Field-Of-View (FOV) coded-aperture gamma ray imager that produces arcminute GRB positions onboard within 10 seconds. The spacecraft executes a rapid autonomous slew that points the focusing telescopes at the BAT position in typically ~ 50s.

The positions and images derived by the various instruments are sent as soon as they are available from the spacecraft via the TDRSS system to the Gamma Ray Coordination Network (GCN). The GCN broadcasts the results to the world via the Internet for rapid response by the world astronomy community for follow up observations by other ground and space based telescopes. At the next satellite pass over Malindi, the more detailed data is sent to the data center where it will be processed for public access within 30 minutes of the pass.

In the past 28 days, Swift has received 156 Target of Opportunity requests (5.6 per day), from 80 members of the community, for 138 different celestial objects. In that time Swift observed 36.4 targets in 124.2 separate observations on average per day. Swift was observing for 71.2% of the time, the rest of the time spent slewing or passing through the South Atlantic Anomaly. Since launching in November 2004, Swift has performed 638,314 observations.