Overview of the Swift X-ray Telescope

The XRT is a sensitive, flexible, autonomous X-ray CCD imaging spectrometer designed to measure the position, spectrum, and brightness of gamma-ray bursts (GRBs) and afterglows over a wide dynamic range covering more than 7 orders of magnitude in flux.  The Beppo-SAX satellite showed that accurate positions of gamma ray bursts can be effectively determined using a high-resolution X-ray telescope, since all of the GRBs observed within 6-8 hours after the burst by the Beppo-SAX X-ray telescopes have fading X-ray counterparts or afterglows, whereas only about 60% have optical afterglows.  However, by the time that Beppo-SAX is able to observe a typical X-ray afterglow, its intensity has already dropped by 4-5 orders of magnitude.  The Swift XRT will begin observations before the GRB ends in many cases, and will fill in the large time gap during which the Lorentz factor of the relativistic blast wave changes from ~100 to <10.  It will refine the BAT positions (~1-4' uncertainty) to 2.5 arcseconds within 10 seconds of target acquisition for typical bursts, allowing ground-based optical telescopes to begin immediate spectroscopic observations of the afterglow. GRB positions and X-ray spectra are transmitted in near real time through TDRSS to the GCN network on the ground for broadcast to the world-wide gamma ray burst community.

lescopes within 6-8 hrs have shown a fading X-ray afterglow. In many cases, the decaying X-ray afterglow joins smoothly to X-ray burst intensities observed during theburst. Thus, a high-resolution X-ray telescope is the instrument of choice for obtaining accurate positions.  The XRT achieves this at a low cost by combining elements of X-ray telescopes from seve 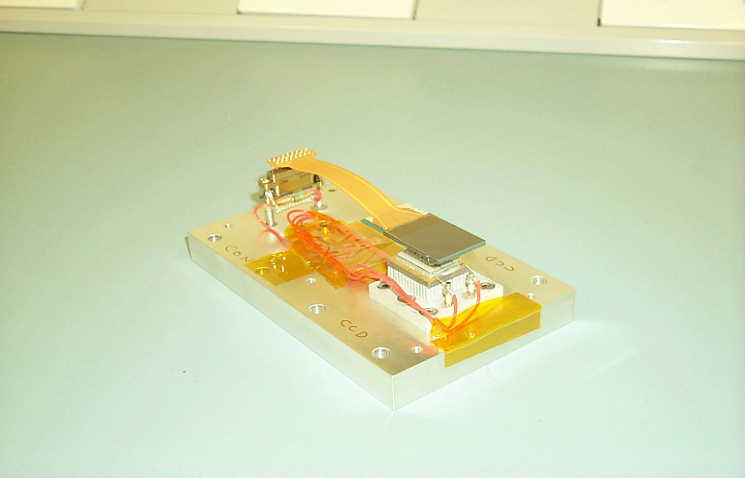 ral earlier missions. The overall telescope design is derived from the JET-X instrument built for the Spectrum X-Gamma spacecraft by the Leicester University Space Research Centre. The XRT will use the JET-X FM3 mirror set (left) built by Brera Observatory (OAB), which has superb imaging quality. This mirror is already built and calibrated. At the focus of the mirror is a CCD detector (right) built by EEV, Ltd. as part of the XMM/EPIC instrument development. The instrument electronics are derived from EPIC and from the SAC-B/CUBIC instrument.

Immediately after a GRB is detected and located by the BAT, the spacecraft will slew to point both the XRT and the UVOT at the GRB location. The 20-70 second time-to-target means that about ~100 GRBs per year (about 1/3 of the total) will be observed by the narrow field instruments during the gamma ray burst. We expect that most GRBs detectable by the BAT will be bright enough in X-rays, at the time pointing is acquired, to produce high-quality position, spectral, and timing measurements with the XRT. For example, the image to the right is a simulation of a typical burst observation with the XRT. The blue circle shows the BAT "Error Circle", which is the region of the sky containing the source, given the position uncertainty of the BAT instrument. The actual source location is shown by the false-color blob centered on this image, which shows the focal spot of the XRT mirrors. The position of this source can be determined by the XRT to within about 1 pixel (2.4 arcseconds). The brightest source in the XRT field of view during the initial observation will almost always be the GRB counterpart, and so this source's position can be sent to the ground-based observers for rapid followup with narrow FOV instruments, such as spectrographs. Once the source position is determined, the XRT will begin measuring its spectrum and lightcurve (brightness variability). In some cases, the XRT spectrum will measure the redshift of the GRB, directly giving its distance.