In its orbit the XRT will be in a very dynamic thermal enviroment. The Telescope Alignment Monitor (TAM) was designed to correct for any thermal variation in the instrument alignment, in particular offsets between the XRT boresight (affected by the bending of the rear tube) and the star trackers (affected by bending of the forward tube). 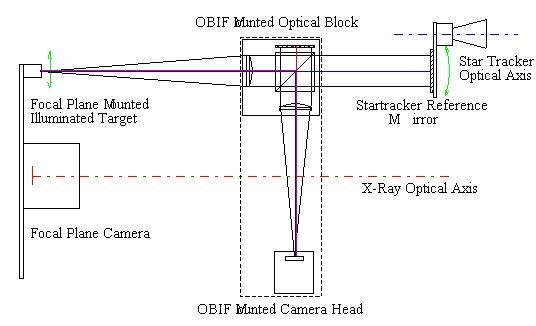 The TAM uses two redundant LEDs mounted on the FPCA. The TAM camera and optics block are mounted on the optical bench interface flange (OBIF), which is the hard mount point for the forward and aft telescope tubes and the mirror module, and which is mounted in turn to the Swift optical bench. The TAM system is closely associated with the Star Tracker and is positioned to co-align with the star tracker reference axes. The TAM has two different measurement chains, the "Primary" for the boresight correction and the "Star Tracker" to monitor the position of the star tracker reference plane. This secondary path includes a reflection from a mirror mounted on the star tracker platform. Two images of the LED from the Primary and Star Tracker paths are projected onto the TAM camera.

The TAM measurements will be made on orbit every 1 or 5 minutes. The TAM centroid will be calculated and used on board to calculate the GRB position and telemetered to the ground for use by ground processing software. There will be two types of TAM image, a full frame window to be used for diagnostic purposes and to verify the coordinates of the two TAM images and more used 50x50pixel windows roughly centered on these images to speed up readout time and processing time of the TAM data.